Finally 'The Hobbit' Trilogy Finally Looks Like a Real Movie 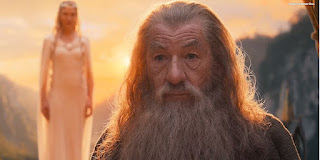 If there ever was a time to give The Hobbit Trilogy another shot, it’s with the release of all three films in stunning 4K. We all remember the intense anticipation that preceded the theatrical release of The Hobbit: An Unexpected Journey, and we also all remember the feeling of disappointment that came soon after. Each generation gets its own upsetting prequel trilogy, it appears. The next two films in Peter Jackson’s Hobbit franchise made an insane amount of money, but didn’t come close to the greatness (or cultural relevance) of the Lord of the Rings movies.

The Hobbit Trilogy was disappointing for a variety of reasons, but one major roadblock was Jackson’s decision to shoot and present all three films in HFR (High Frame Rate), which in turn made them look like stagey soap operas instead of immersive fantasy films. Even if you chose not to see The Hobbit in HFR, the downgrade of footage that was shot in 48 frames-per-second to exhibiting it at 24 frames-per-second still created a disconnect of sorts. Like there was plastic packaging over the entire movie that prevented you from really engaging with the material. It looked real bad, is what I’m saying.

But folks, the 4K release of The Hobbit Trilogy removes that roadblock once and for all. I received a copy of The Hobbit Trilogy on 4K Blu-ray for review, and actually delighted in revisiting these films for the first time since their theatrical release. Sitting there watching The Hobbit: An Unexpected Journey, I was kinda dumbfounded at how fantastic this thing looked and how – most importantly – it looked like a movie. The gorgeous 4K remaster (overseen by Jackson) maintains the painterly details of the CG background work while seamlessly combining them with the practical sets and actors, a juggling act that was bungled in the previous releases of these movies. Something always felt “off,” but now they finally feel like they somewhat fit into the world Jackson first created with the Lord of the Rings trilogy. And the sound? Holy moly, if you’ve got a sound bar or surround sound system, prepare to have your socks blown off by this Dolby Atmos mix.

So does the 4K improve the movies at all? Ehh, a little bit. An Unexpected Journey improves the most with this new home video release, as that Fellowship of the Ring vibe of the first film comes through a bit stronger. The 4K release includes both the theatrical and extended versions of all three Hobbit movies, and I opted to check out the extended versions for the first time on this go-around. Again, it finally felt like I could engage with the material this time around, and the warm tones of An Unexpected Journey actually feel cinematic now. No longer does this feel like you’re watching a troupe of actors perform community theater on the most expensive sets in history.

Alas, what this 4K release makes clear is that the problem with The Hobbit Trilogy was not in its presentation, but in its construction. Back when it was first announced and Guillermo del Toro was directing, fans were already dubious about the prospect of turning J.R.R. Tolkein’s relatively brisk source material into two movies. But the decision – after the bulk of principal photography had been completed – to stretch this thing into three movies really does a disservice to the characters and story. You can feel Jackson inventing new set pieces to elongate the central adventure, and as much fun as it is to see Luke Evans brooding as Bard the Bowman, the trilogy doesn’t really succeed in expanding upon any of the characters from Tolkein’s books.

The only positive extension is all the stuff involving Gandalf (Ian McKellen) and Dol Goldur, and even then I can recognize it’s just partly because I’m responding to LOTR fan service. When the most exciting part of your movie is Gandalf hinting at the return of Sauron and not the main characters or story point, you’ve got a problem.

The Desolation of Smaug looks fantastic, especially as Orlando Bloom and Evangeline Lily enter the fray, but by the time you get to Biblo’s (Martin Freeman) confrontation with the titular dragon, you’re worn out. Exhausted. And then Jackson finds yet more complications to throw at the plot to stretch things out even longer, when the simplest story point is just “then Smaug breaks out.” At least The Battle of the Five Armies is just unabashedly an entire movie made up of a third act, with long stretches of no dialogue and lots of grunting. But to what end? Again, in 4K this stuff looks pretty stunning, but looks only go so far when you don’t care at all about the characters at the center.

Still, I’m glad I gave The Hobbit Trilogy another shot, and I’ll admit, as a massive fan of Jackson’s LOTR trilogy, even just being in this world is kind of fun for me. I can imagine revisiting these films at some point in the future, but not with the same frequency as the original trilogy.

You should also know that the separate 4K sets of The Hobbit Trilogy and The Lord of the Rings Trilogy are bare bones – and I mean bare bones. There are no extras and there’s not even a commentary track. Warner Bros. Home Entertainment will release a box set with all six films on 4K next summer with a new piece of bonus content yet to be announced, but if you want to watch “The Appendices” making-of bonus features, you’ll want to hold on to your previous Blu-ray and DVD sets.

But if you just want to watch these movies in 4K? This is absolutely worth the purchase. Especially if you’re curious to see The Hobbit films look like real, honest-to-good-ness movies.

Popular posts from this blog

'The One' Review: Netflix's Newest Sci-Fi (Ish) Drama Does a Lot With a Familiar Premise

Imagine: What if, thanks to the hard work of scientists, modern society has created a test that can determine, with 100 percent accuracy, who your perfect romantic match is. No more bad dates, no more heartache — all the guesswork involved in falling in love is a thing of the past. Whether or not that sounds like a dream or a nightmare, there's no denying that it's an interesting premise for a drama, which is perhaps why not one but two different British shows have come out in the last six months which are about exactly that: Last fall's Soulmates, which aired on AMC, and the brand-new The One, now streaming on Netflix. This is, to be clear, a review of The One, but as someone who watched Soulmates months ago it was pretty hard to separate the two in my head. To the best of my knowledge, there's no significant overlap between the creative teams beyond some visual effects artists; Soulmates, according to creators William Bridges and Brett Goldstein, was an original idea
Read more